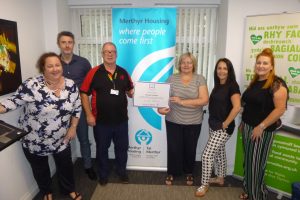 Merthyr Tydfil Housing Association has signed up to a new national campaign to help it tackle domestic abuse in communities across Merthyr Tydfil.

The Make a Stand campaign centres around a pledge which has been developed by the Chartered Institute of Housing in partnership with Women’s Aid and the Domestic Abuse Housing Alliance (DAHA).

It consists of four commitments which housing organisations can make to support people that live and work in housing who are experiencing domestic abuse.

Alison Inman, CIH president, said: “I’m thrilled that Merthyr Tydfil Housing Association has signed the Make a Stand pledge as this could make a very real difference in local communities.

“Domestic abuse is one of the biggest problems we face today. Millions of people are affected and two women a week are being killed by their partner or ex-partner.

“Housing organisations house and employ millions of people and it is our duty to do more to tackle this issue. These are our homes, our people and this is our problem.

“By signing the Make a Stand pledge Merthyr Tydfil Housing Association has committed to supporting people in its communities and it is no exaggeration to say that this could save a life.”

Kelly Henderson, co-founder of DAHA, said: “We are very proud to be part of this pledge and commend Merthyr Tydfil Housing Association for signing up. We know the housing sector plays a crucial role in recognising and responding to domestic abuse and this pledge is a really easy way to not only demonstrate commitment but also take the first practical steps to improving the response for both staff and residents.”

Katie Ghose, chief executive of Women’s Aid, said: “For thousands of women and children across the country, their home is the most dangerous place they can be.

“By signing up to the Chartered Institute of Housing’s Make a Stand pledge, Merthyr Tydfil Housing Association has sent out a powerful message to survivors of domestic abuse that they are not alone and that there is help and support available to them.”

Make a Stand was launched as part of CIH president Alison Inman’s presidential appeal and Jim Strang has already agreed to continue to support the same cause when he takes the helm in September.

Organisations can sign the Make a Stand pledge on CIH’s website and receive a support pack and other information to help them put the commitments in the pledge in place.

The four commitments are: