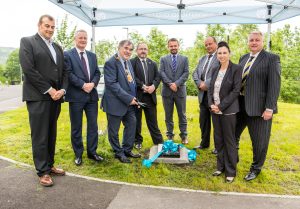 Merthyr Tydfil Housing Association has unveiled a plaque to mark the official opening of 23 new homes in Aberfan.

The £2.6m housing scheme at Railway Close was built by appointed developer ENGIE (formerly known as Keepmoat Regeneration), to rehouse existing tenants. Built to Level 3 of the Code for Sustainable Homes, the dwellings are energy efficient and provide excellent levels of comfort for the occupants. The scheme was funded by Social Housing Grant from the Welsh Government of £1.5m and private finance from Merthyr Tydfil Housing Association of £1.1m.

Karen Courts, Chief Executive of Merthyr Tydfil Housing Association said: “The development of 23 new homes in Railway Close is part of the Project Riverside strategic regeneration programme which aims to ensure expenditure and the resident population within the communities of Merthyr Vale and Aberfan is retained. These new homes were offered to tenants of Taff & Crescent Streets, since those streets are due to be demolished due to the serious flood events and significant concern for the health and safety of tenants and residents if a major flood occurred. We are delighted with the standard of build and the level of engagement between the contractor and the local community.”

Councillor Darren Roberts of Aberfan and Merthyr Vale ward added “I am extremely pleased to see the residents of Railway Close in their new homes. Since elected for the first time in May 2012 I have liaised regularly with Merthyr Tydfil Housing Association on a number of issues related to Taff Street & Crescent Street. The completion of the build is to a very high standard, Keepmoat did an excellent job and with very little disruption. I know how difficult it was for some residents to leave their homes in Taff Street & Crescent Street but I hope they are settling in to their new homes and will enjoy them for years to come.”

As part of the work, ENGIE and Merthyr Tydfil Housing Association supported the local community by sponsoring events and providing construction themed workshops at local schools. The partnership also introduced an Induction to Construction employability programme which helped young people to secure paid employment, of which ,one young person was awarded the Traineeship Engagement Learner of the Year at the People Plus Awards.

Edward Rees, Regional Director at ENGIE said: “We’re delighted to have joined our partners in celebrating the official opening of Railway Close. Throughout the build, we worked closely with Merthyr Tydfil Housing Association to ensure to that these homes were of the highest standard. We’ve now created a haven were a community can thrive and we hope that the residents enjoy living here.”

The development was completed in October 2017.